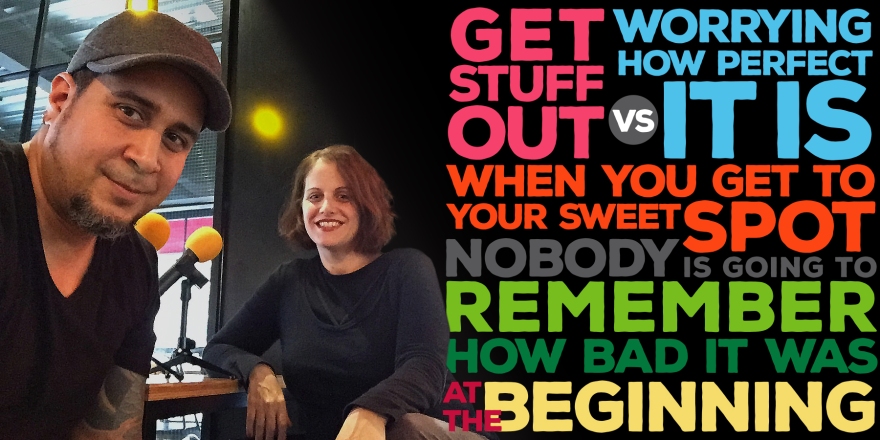 Stephanie Fuccio is a fellow podcaster, but not an ordinary one. She has made of her passion for podcasting, communication, connectivity, culture, and education an amazing mix that is already touching and influencing those who follow and listen to her with engaging, interesting and I might add, a continuous stream of online content.
Stephanie called me for the first time and out of the blue one good day when I was riding the train on the way to Shanghai. She was looking for resources for her own podcast and another fellow podcaster gave her my number, little would I know that this phone call would lead me to be interviewed that same evening by Steph for one of her podcast, Virtual Expats and from that day on she became my buddy not only because of her affable personality, her honesty, professionalism and the incredible level of commitment she dedicates to her several projects which are for me a reason of admiration.

Although she insists on calling herself not-creative she is the personification of what I think is the most important aspect every creator should have, the crystallization of the ideas, which are the same as non-existent until we actually put them out to the world and that is what Steph does so well.
That doesn’t mean she is just indiscriminately putting stuff out, she is actually producing, curating and editing everything she is sharing which is incredible to me, given the immense amount of work this represents.
Find more about Stephanie Fuccio at:
www.stephfuccio.com
https://linktr.ee/stephfuccio
Instagram: @stephfuccio
The Creator for this episode was: Masterkhisis
Performing: Awakening
SoundCloud: https://soundcloud.com/masterkhisis
Instagram: @masterkhisis80
You can find the London based theoretical physicist and experimental potter Nadav Drukker that Steph mentioned in this episode on Instagram @nadavdrukker